Day 5... Well.. let's get started.
We only completed 171 miles today. Both Paul and I had some work to do, so we took an early exit and got a hotel tonight. All-in, we've completed 1,076 miles of the TAT (approximately 1/6 [16.666%] of the way complete! the optimist and data-focus in me likes thinking in those terms)
Breakfast - Horrible place in Boone - I won't give their name.. but literally the worst biscuits and gravy ever. Also, they were keeping the front door locked. I'm sometimes passive aggressive... so I made multiple comments about the fact that locking the front door is actually illegal. But Covid.
The morning was spent mostly off-road - one or two of the legs through NC was quite a long ride... I swear maybe two hours or more straight of mountain/gravel/dirt roads. We enjoyed it. We even commented on how we started feeling a sense of rhythm to the road. I turned on the GoPro and recorded a small five minute section - but I can't upload yet... wifi in this hotel sucks.
Hotel / Camping Ratio - 3 Hotels, 2 Camping nights. I'll try and keep up with this ratio - not sure I'll be able to remember. Keep me honest. The wine drinking nights will be easier for me to count :)
Later in the afternoon, we ran into Josh Harrington on tablerock mountain. Stopped right there in the middle of the forest on a "high traffic area" (more on that later) to chat - it was great. He said he lived within 45 minutes of the area we were riding and that he didn't know that the road we were on was part of the "TAT" - I of course explained that it is within Sam's routes - I don't know about GPS Kevin's. Josh wished us well on our travels and he parted ways - great chatting with him. The camaraderie on a dirt road is classic. Josh - if you read this, pleasure meeting you sir! (dammit, should've gotten a picture of the three of us together.)
Traffic on forest roads - I surmised early in the day that we'd see heavy traffic off-road today. It was a Sunday. People need to get out and covid is a bummer on the summer (don't quote me, but doesn't Lana del ray sing a song about that??) [some of my friends will understand]
Traffic on Forest Roads today consisted of the following:
Runners
Hikers
Bicyclists
Motorcyclists
Dirt Bikes
Dog Walkers
Golf Carts
Lookey-Loos
Onlookers
Naysayers
and most importantly, The Rule Breakers,The Risk Takers, PAUL AND ME! (or is that Paul and I... dammit, Mrs. Ellis would be very unhappy with me right now - I'll blame the fact that it is 10:15pm and I'm exhausted)
(I swear this will all make sense...maybe)
Road Closed - Pisgah National Forest - Black Mountain Campground:
35° 45’ 3.378” N
82° 13’ 15.030” W 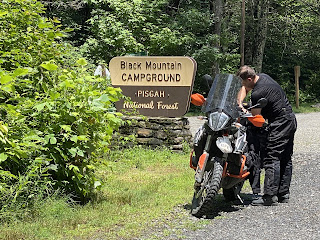 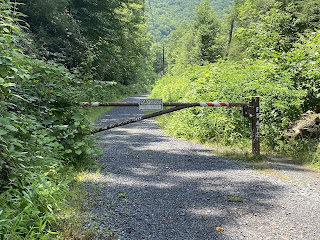 There were many onlookers and some naysayers (old people in golf carts on a forest road???) as Paul and I pulled up to the sign - bunch a lookey-loos providing useless banter to the likes of Paul and I, the rule breakers, the risk takers, the... um... well, we-crossed-the-line-and-hoped-we-didn't-find-anything-that-would-make-us-turn-around guys. men of steel. or um, of steel, rubber, and gasoline? um... anyways.
The good news, there is nothing on this road that keeps an adventure motorcyclist from continuing beyond the "road closed sign". As I passed what appeared to be a 'damaged power line' - possibly downed power line, I said to Paul: "that is probably the reason for the road closure". So there you have it. KEEP GOING!!! Despite the negative-nannies standing around or sitting on the golf carts. You show them you're the man/woman and that you don't color in the lines. you make your own lines! :)
and at the exit of this closed road for the win! (the exit was a little risky - pole, ledge, tree. we owned it) 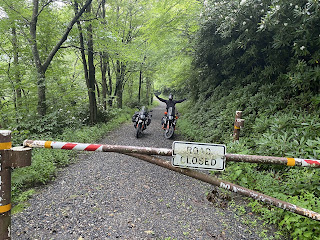 Animal Sightings - Practically none - too much traffic on the forest roads. Animals probably knew it was Sunday and everyone was out having covid-free fun with built-in social distancing.
Not too many pictures, mostly because we kept a good pace and didn't stop much, despite the low miles.
Lunch was pretty good @ Famous Louise's Rock House in Newland (near linville falls) - my arteries were satisfied with the grease level from my bacon cheeseburger. 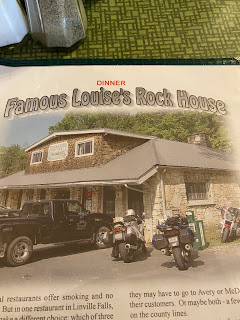 Dinner was regretful - It is Sunday, things are closed. Hotels are 50% capacity. So I booked a hotel while we were sitting at lunch. Didn't know the town, but it near/outside of Asheville, so I figured it couldn't be that bad. Got here to the Mars Hills area / checked in. Got the lay of the land related to dinner options. Decided we wanted either Mexican or Japanese. The burrito joint was closed due to Sunday and/or Covid. The Japanese restaurant was open. WOOHOO! or so we thought. pull up, lady immediately comes outside and asks if we're picking up. um...no. I'd like to come inside and eat like a normal human being. Um... Covid, so no. "We've decided to close our restaurant seating until Covid disappears" (or something like that was said to me). Yeah, good luck with that. Anyways, we order dinner BY PHONE (she wouldn't take our order in person), we pay in the parking lot, and eventually we somehow stack/tie down our dinner to our motorcycles (should win awards for this) and then we went back to the hotel room to eat. 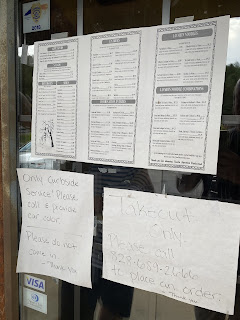 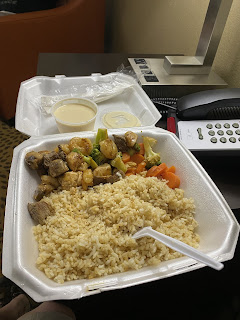 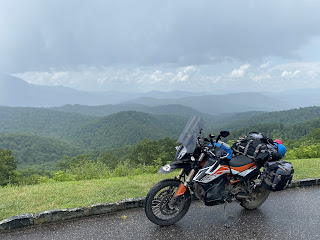 We are the little green motorcycle...
(men of steel, rubber, and gasoline) 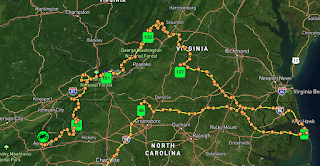