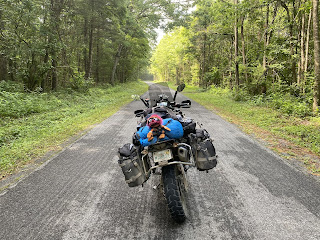 It has been a day! Let’s start with the easy stuff…

Many Deer - Mostly running right in front of me.

Black Bear Cub / Mama - Riding in the middle of a forest on gravel/dirt roads. Running about 35 around a corner when I spot a cub in the middle of the road. I slam on the brakes and immediately tell Paul over our Comms what I’m seeing. The cub immediately runs for the nearest tree and starts climbing. I’m sitting there on my bike watching the cub and then scanning the area because I know mama is near by. After about 20 seconds of watching the cub and scanning, I see mama coming down the hill above me at full speed. I tell Paul as I rev up and release the clutch to get the hell out of there cause mama is coming and she’s pissed. We escaped, but enjoyed the sighting.

The morning was uneventful - with some good forest roads and good backcountry farm roads. Enjoyed them all… until I swear we were running about 25 miles of switchbacks and mud. I almost had a couple spills. Managed to keep the wheels on the ground and power out. 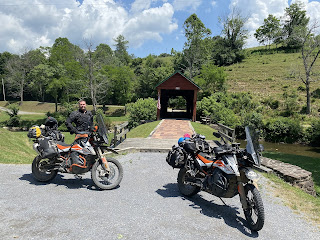 Around lunch, we starting looking for a place to eat. As we are pulling up to the exit where Virginia Tech is in Blacksburg, VA, Paul tells me that his gear shifter is broken - won’t go up, won’t go down. I immediately expect the worst - we don’t have many miles on these bikes and the early hard riding has screwed up the gears or something. So we pull over into the median cause he can’t do anything else.

I tell him through comms to get off the bike so I can inspect the bike. Immediately notice that the linkage is missing a bolt and is just dangling there. (Sigh of relief) I start playing with ideas on how to get it back up and running temporarily so we can get to a hardware store (also, I wanted lunch badly…) 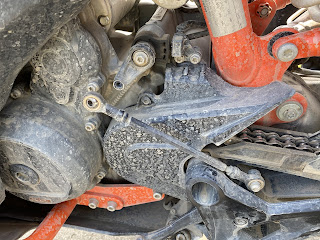 Zip ties and one of my Allen wrenches to the rescue. I put the Allen wrench in the gear linkage and zip tie the whole ordeal together. YEAH!! It Works. We roll over to the Firehouse subs for lunch. While in there, I make a call to my KTM dealer and ask for size information for the missing bolt. They provide very little in the way of assistance. Paul finds an Ace Hardware and we head on over there. I actually take off my bolt for the gear linkage and take it inside with us. We find a similar sized bolt and purchase a couple of other necessities (lock tight included). 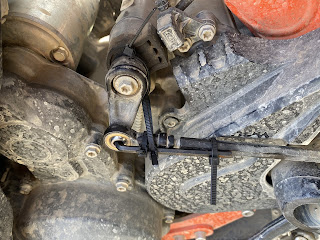 Repair in the parking lot. Check other bolts in the same vicinity - blue lock tight everything.

On the road again.

It is now about 2:40pm - the day has been screwed royally - so we decide to find the TAT again and line ourselves up for tomorrow while we find a camping spot for the night. Nothing much around except a couple Bureau of Land Management primitive sites. So we purchase some food at a very small market and make our way out to the first of the two that we are aware of… sign says “due to covid..” (Gate locked)

We are pretty good at not following rules so we ride around the gate and find that we aren’t the only ones “breaking the law” - no one is around, but every camp site is full… also - we ask each other, how the hell did they get that car in here??? We let it pass without another thought as we identify a spot we could use for the night. Start unpacking and all the sudden, a truck pulls in. Now, how the hell did he get in here? Three young guys get out and two of them walk towards their AO (area of operations) and one starts walking our way. He says that this area is closed and we’re like, yeah it is. He then proceeds to explain that they’re with the forestry service and camping out there because they’re working on stuff in the forest. GOT IT. Anyways, we can’t stay… so Paul and I are pretty frustrated because the only other camping site out here in the woods is not for tent campers, but specifically for camping with a camper and horses. With very little in the way of choices, we opt for breaking more rules. Roll over to the horse camp and pick a spot. Good thing, there are only one other set of campers with horses and they’re on the far side. 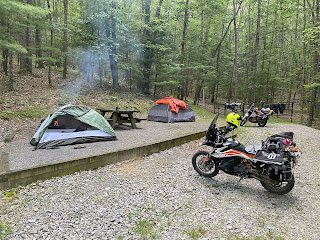 We immediately make a camp fire and start cooking ramen noodles. Yep, what a meal. Anyways, there is no water at camp, so after we eat, I shoot back over to the small market and buy more water, beef jerky, and a tall bud light beer.

Here are the pictures. 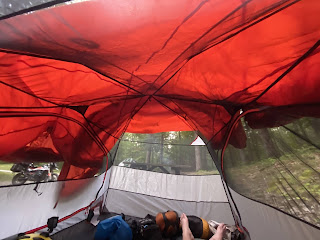 Great View from Inside my Tent 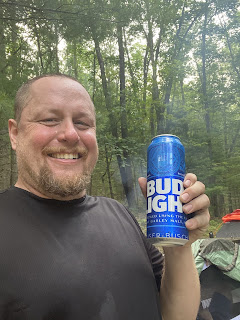 Grabbed this from a local "we have everything" stores. 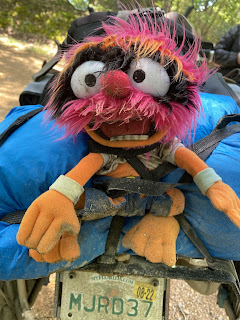 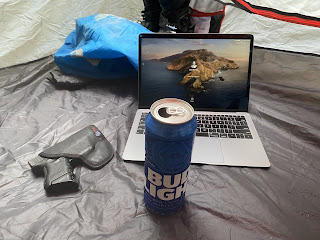 Necessities in the Tent. 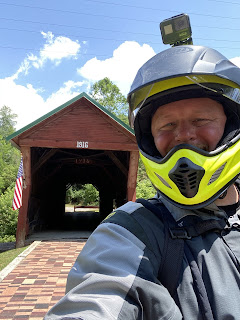 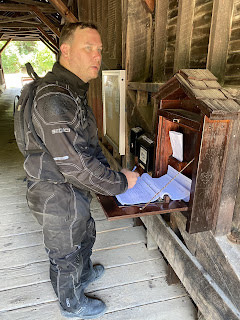 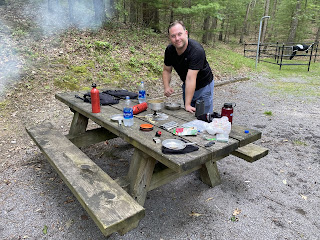 Ramen noodles for Dinner. (not many choices...) 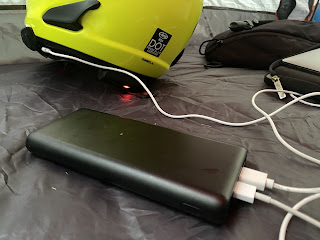 I definitely suggest getting a battery pack like this one if you're camping. Charges everything!!

Posted by Jerry Sherman at 7:32 PM