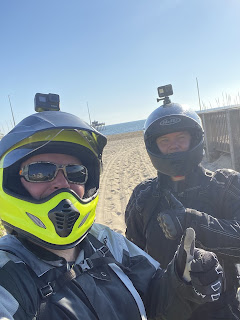 Paul and I at the Start of the TAT
I can’t believe this trip has actually started. We took off from the sand in NC with the vision of landing in the sand in Oregon!!
We know that there will be challenges presented to us on a daily basis. Today's immediate challenge occurred at MILE ZERO! We wanted to put the bikes in the sand at the start of the TAT to take a picture. Well, that didn't go quite as planned. In fact, my rear tire buried itself so deep that the bike was able to stand straight up without using the kickstand. So we had to push his bike back out and then go get mine, I went in first of course... so I was further. and deeper. 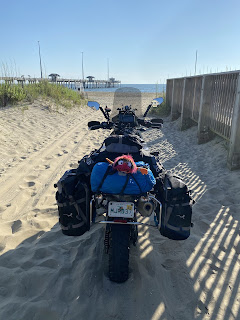 Thinking about the trip, normally you plan every step of the way (OK. That’s what I do). I don’t leave things to chance... normally. But in this case, you don’t have a choice. No plan, go with the flow.
Some friends and I rode from tellico plains tn through the ozark mountains in Arkansas back in 2013. Essentially the first three states on the TAT (2013 version). Now it is truly a Coast to Coast adventure. Since then, I’ve switched from the KLR 650 to the venerable KTM 790 adventure R. Quite the difference!
One should ask: why would anyone want to subject themselves to the torture and elements that an off-road, cross country motorcycle adventure would entail?
For me, it’s simple. It’s the adventure. Yes, there will be challenges. It won’t be easy. There are certainly opportunities to injure oneself. I’ve watched many YouTube videos of the worst case scenarios. So, skills, instinct, and some luck will hopefully take me from the East Coast to the west coast.
We had breakfast today at Bojangles - most everyone knows that we don't have Bojangles where I live, so if I get near one, I'm having a Cajun Filet Biscuit Combo with Large Sweet Tea. Lunch was at Ray Ray's Diner - which was GREAT - literally, just off the TAT. We arrived around 1:30pm, they were happy to see us and we left a big tip because COVID is ruining small businesses.
At around 3:30, we decided to pull over and find a place to rest for the evening. Camping was the goal, so I looked through multiple phone apps for local campgrounds. Found one about 45 miles away from the position we were in - there was also a Wal-Mart within 8 miles of the campground - so I gave them a call to check availability for tent campers. Fortunately, the lady from Paradise Family Campground decided to make an exception to the 'COVID laws' or whatever... she gave us a spot. So we went to Walmart, picked up some steaks, potatoes, and some seasoning.... then headed to the campground.
The decision to pull over at 3:30 was a very good one - it gave us enough time to locate/reserve spot for camping, get food, check into the campground before they closed, hop in their pool, put up tents, and cook. By the time we cleaned the dishes, it was already 8pm. It is now 9:58 - I had some work to do and I wanted to post my daily diary.
Animals and such that we had seen today: Possible Muskrat. Very tiny doe (baby) - so tiny, I thought it was a rabbit. Geese. Ducks. Fire Flies (looking at them right now through my tent).
Dinner was a bit of a challenge because we're 'getting used to the routine' and we've got equipment we haven't used before. Specifically my cooking equipment... I kept catching the picnic table on fire :) 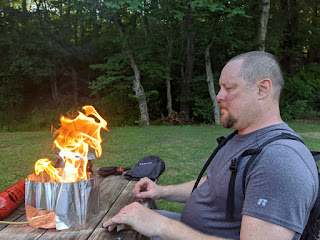 Note the black smudge on my face from dealing with the various fire issues I was having... hahahahah.
We did end up having four great filet mignon steaks that we had to butterfly because our pan was too hot for the steaks to cook thoroughly. One major screwup - we had camp soap for cleaning the dishes, we did not have anything to scrub the dishes... so Paul decided we could use dirt as an abrasive to wash the dishes. it worked.
We completed 298 Miles today... our butts were definitely sore. Guess it'll take some getting used to. We've still got about 5,500 miles to go??
Here are some more pictures from Day One. 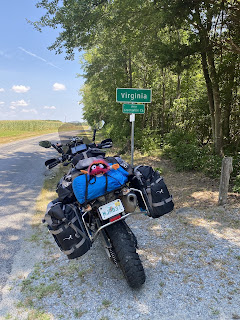 Made it to the Virginia Line! 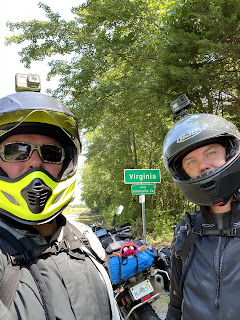 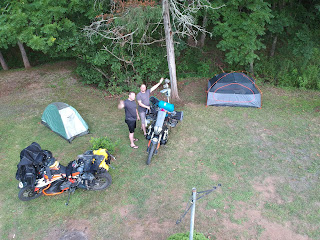 The View from above our campsite (taken with a drone) 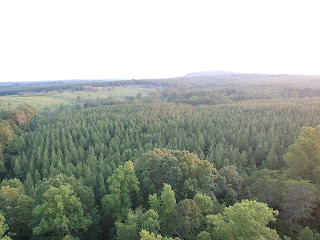 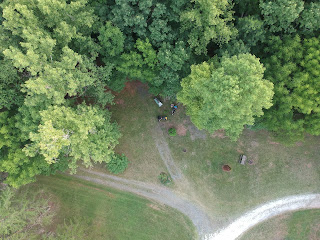 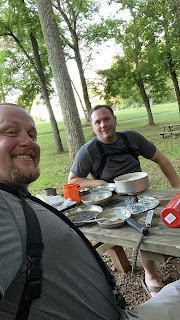 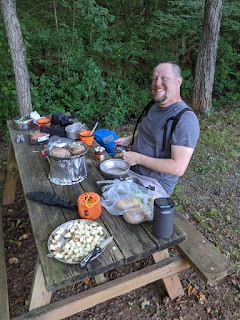 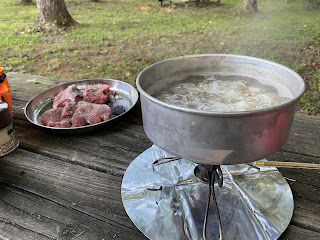 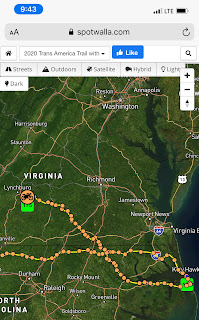 We went from the east coast in Nags Head, NC to Spout Spring, VA 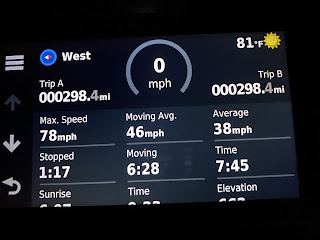