Overall, we really had a great day.. there was a good mixture of road / gravel / switchback. We made some pretty good progress. We did find some minor discrepancies in the GPS tracks, though we were able to overcome them fairly easily and without major rerouting. It is Saturday Morning - 8:42am, we haven't started riding yet because we decided to go have some fun last night in Chattanooga.
We completed 232 easy miles yesterday.. total for the trip now is 1,842.
A couple examples of the issues we found with the tracks were on TN-13 I believe.. we came across an area where the road that Sam must've ridden down no longer exists. But, we made the best of it and hung out at the following overlook. The grid coordinates for this spot and the error on the gps is 34.6519450, -85.3724050. From what I read, apparently this is the "Pigeon Mountain Hanglider Launch" location... WOW. To fix this issue, we backtracked to the first dirt/gravel road that we came to on our left (during back tracking) - maybe mile or two down the road. Took the left, it eventually (not really far) intersected back with the TAT route. I figured all this out by reviewing the maps in GAIA GPS on my phone... My Garmin XT was not a lot of benefit here until we were back on the right track. Because of how nice of a view it was, we hung there for 20 minutes or so, enjoyed the view and some water. (yeah, we're drinking tons of water) 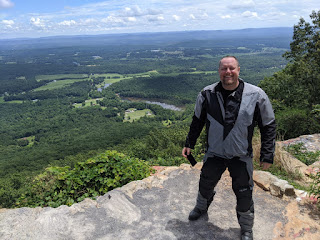 The second issue we came across was the fact that Sam's track took us straight to this gate. Note the sign saying Private Property - Shooting Preserve, No Trespassing. Well... it was all a little suspicious to us. Paul and I surmised or at least wanted to believe our made up conspiracy theory that this area and the roads around here are all connected to some sort of top secret government facilities. I believe we actually called it the Area 51 of Georgia! (ok, we're just making stuff up... but come on, it was great conversation over comms)
Grid coordinates for the location: 34.6402783, -85.4118883
We didn't break the rules this time, that gate was padlocked and there wasn't a way we could figure out how to get in. Routed around this by taking the "right" at this gate, which borders this entire property all the way to the end of the property - at which point you link back up with the TAT (and can see the other gate where the TAT would have exited). Rerouting was easy again... GAIA GPS to the rescue. 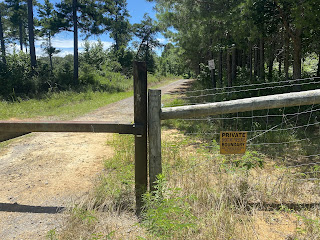 We had dinner at a nice restaurant, 1885 Grill in the St. Elmo area - very cool older part of town. Lots of brick buildings from a "few" years ago. It was good to see the place packed... probably not paying attention to the governor's mandate around capacity. (rule breakers!!) I had a steak and some wine. After this, we continued the party at a local establishment that we were able to convince to play our kind of music. Tool, Nine Inch Nails, and many other 'rock' songs. Which apparently was different for the crowd/entertainers as everyone kept commenting on our choice of music. 1885 didn't have a great wine selection, this was the best on the menu... we made due with 3 or 4 bottles (can't really remember) 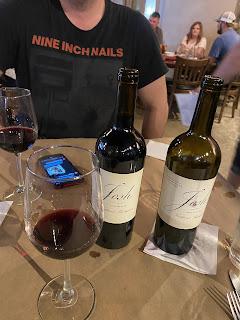 One of the waitresses at 1885 had a strange tattoo, so strange that I took a picture of it. Paul and I called it the Bear molesting the princess. 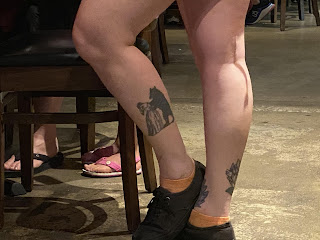 Earlier in the day, we had just come down off of a mountain / dirt road and came to this great little property in Georgia. Looked like it had been there a long time, the property/buildings are typically used for weddings is what the lady in the store told us. We sat on the front porch with some candy bars and cokes we bought inside. There was a nice breeze and a great view in front of us. Nice and relaxing..
34.6308417, -85.4539200 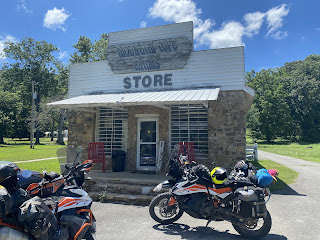 I'm still lying in bed. But it is time to get up!!
Here are the rest of the pictures. 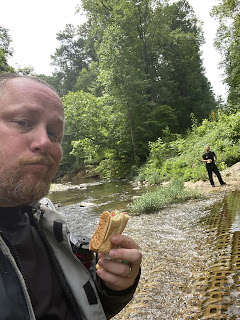 Lunch on a creek - the cinderblocks below cover the buried pipeline. Interesting spot.. 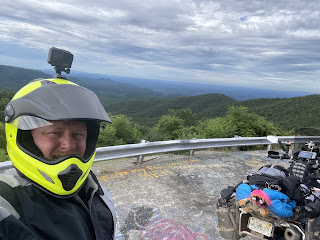 An overlook we found riding down a really nice / curvy road. 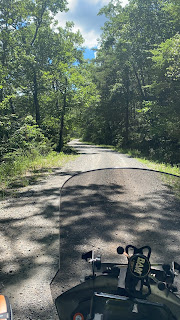 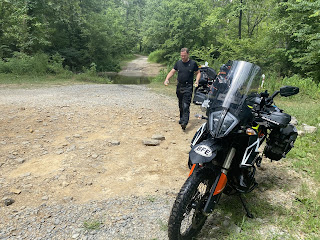 We didn't need to, but we crossed this creek a couple times. Even got a video! 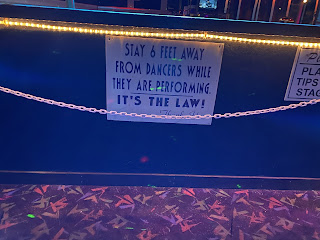 IT'S THE LAW!!!
(rule breakers unite) 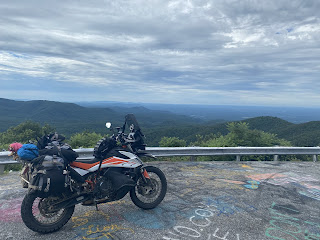 Posted by Jerry Sherman at 8:59 AM