Leaving Blairsville, GA.  I enjoyed the atmosphere of The Lodge at Copperhead, A motorcyclist' get-away in the Georgia mountains.  I need to go back there again and spend a few days!  We stayed in a cabin on the backside of the property, had a small garage to park the bike, and a hot tub on our back porch.

After unpacking the bike, we rode over to the lodge for some grub and libations.  The lodge itself is quite large, well decorated, caters to motorcyclists (specific parking spots right up front), and they have live music on certain nights of the week.  We decided to skip out on the music that night due to the long day behind and ahead of us (I believe it was the hot tub calling us).  While dinner was cooking, I drank their last two yuengling in the bottle...lady tried to sell me on yuengling in the can, but I wasn't having it.  Looking forward, I asked the bartendress if I could purchase a bottle of red wine and take it back to the cabin.  She had to ask the owner.

Overall, a great evening spent at the lodge.  With the next day's events on my mind, it was a relatively early evening.  Though the bartendress attempted to light my fuse with a free shot of grandpa mimm's "legalized moonshine.". 100 proof...and it tasted like it too.  I think she does that to get people to stay and drink...normally, a shot like that would trigger the drinking side of me.  The bottle of red would suffice tonight.
0700 wake up. Day two.

This entire trip revolves around Day Two.  While the journey was certainly the overall goal - it wasn't until day two that the riding really begins.  Some of the best roads in the US exist in these mountains and Day Two was our opportunity to traverse sweeping curves, switchbacks, and enough elevation change to re-moniker the Harley, "the sherpa."

The wife, determined to bring a cooler with us on the bike, made certain accommodations (restrictions on her own packing list) to ensure it would fit.  The first thing on the agenda after packing up the bike and breakfast at the lodge was the local gas/convenience store.  Ice and Gatorade.  And some more four dollar petrol...(on a side note, getting about 42-45 mpg on the Harley).  Wife brings out a large bag of ice with the drinks and I think to myself, hopefully she has a plan.  Six bottles of water and a couple gatorades, of which, half fit in the cooler.  All good, we make more accommodations, despite the humor I was finding in all this, I know we need the liquids.  The extra ice was given to some boys in a jeep with a boat on the back.  Figured they could use it.
The entry road to the lodge was fraught with stop lights, with which I was determined to avoid on my way out.  A slight redirection of the plan put us on some great warm up roads.  Great mountain scenery and no stop lights.  Kind of forgot to mention...cops were everywhere.  Compensating for poor budgetary planning through additional taxation of holiday travelers.  Back on topic.  Taking the back way to tellico, lining us up for Cherohala, the Tail of the Dragon, and the parkway into Gatlinburg was the perfect alteration of the overall plan.
﻿
This being my first real motorcycle experience out of Florida on roads that don't go completely straight, I was pretty excited to get moving.  Have I mentioned that I purchased the Harley on May 1, 2012?  I passed the Harley Rider's Edge course in January 2010 so the government could endorse me to ride motorcycles.  I have rented at least 10 different motorycles since my endorsement in January 2010.  However, all but one of my trips were here in Florida.

Today's ride was only about 200 miles, but covered some of the best roads in Georgia, Tennessee, and North Carolina!  The Cherohala Skyway was a great ride with breathtaking views.  It is quickly becoming a road enthusiast's dream come true with the sweeping corners, scenic views, and cool summer temperatures!  The Skyway covers 15 miles in NC and 21 in TN - it crosses through the Cherokee and Nantahala National Forests - thus the name "Chero - hala".  Apparently the road was under construction for around 34 years and cost NC around $100,000,000.  Not cheap, but to me (a non-NC tax payer), well worth it!!

In my regular perusal of the Internet, I found a woman motorcyclist that has an interesting blog about her travels.  It is a little difficult to admit, but true: "I frequent a blog named Fuzzy Galore", and no...not porn related - which the author accurately depicts as a "Girlie Motorcycle Blog".  (I should mention that at least her blog name has some originality...mine is boring).  Her perspective however, is kinda comical and the riding / adventures are inspiring.  Anyway, my reason for bringing this up - she mentions in her blog how she prefers to take timed pictures while riding with her GoPro versus the video option.  I took her lead and setup my camera for a picture every two seconds while I rode the Cherohala Skyway.  To each their own, but in this case, my own opinion is that the effort to review is much too high and the amount of "good" content is very little for the effort.  Also...the images use MUCH more space than a video due to the quality of the images and the sheer amount.  Either way, I took time out of my life to find pictures of a couple cemeteries and a few cops. 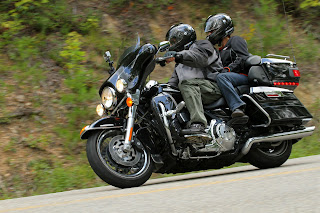